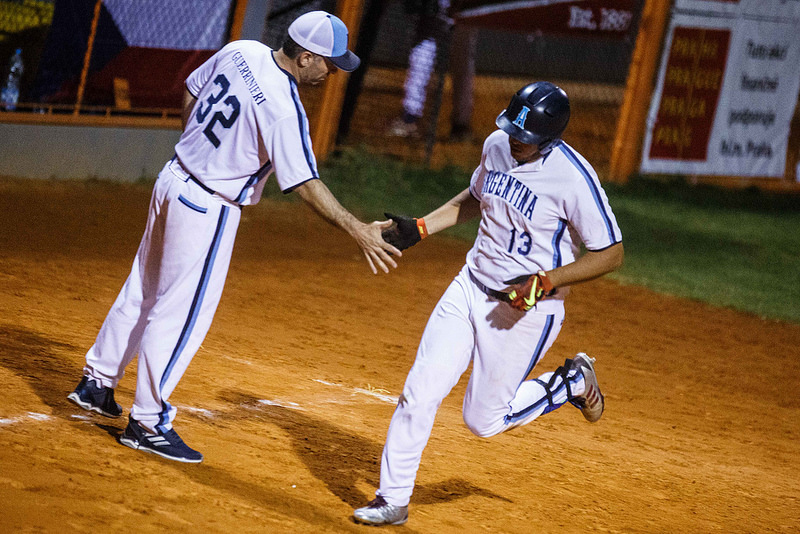 Teams for the semifinal confirmed

Argentina takes the win after five innings against Denmark which made them sure of a spot in the semifinals. With Japan winning against the USA, the Czech Republic secured their spot in the semifinals as well. Together with New Zealand they form the top four and will battle for the gold medal tomorrow.

Argentina earns a spot in the top four by a mercy rule win (ARG 9 : 1 DEN) The Argentinians showed no mercy from the first inning. With four runs due to doubles, singles and some errors on the Danish side, they took an early 4:0 lead. With only one hit allowed and seven strikeouts in the game, Argentinian pitcher Roman Godoy knew how to make the Danish bats quiet. In the top of the third inning, Nicolai Elsner (DEN) hit a solo homerun making the score 6:1. However, it was not enough. Francisco Lombardo´s 3 RBI homerun in the same inning brought the score to 9:1 - an early ending for the Danish. The best batter of this game was Alan Peker (ARG) who hit 3/3 and scored three times. With this win, Argentina advances to the top four of this tournament. The Danish will play tomorrow for the 5th place. Japan too strong for the US (JPN 10 : 7 USA) With a solo homerun by Jonathan Lynch, a 2 RBI homerun by Erick Ochoa and a RBI single by Tyler Dudley, the first two innings were exactly what the Americans were hoping for. Unfortunately for them, the 4:0 lead did not last very long. The Japanese woke up and tied the game with four runs in the fourth inning. In the following three innings they even increased the score to 4:10. When Yuya Yamawaki (JPN) entered the mound to close the game, the Americans had a slight hope with two solo homeruns by Jonathan Lynch and Erick Ochoa. Together with Derrick Kennedy´s RBI hit, they reached the score of 7:10. The USA will play the 5th place game tomorrow against Denmark. Walk off double ends game against host team (NZL 7 : 0 CZE) The Czechs knew they had a difficult job to do against the World Champion. Due to two wild pitches and a passed ball, the Kiwis scored the first run of the game. After RBI hits by Zane van Lieshout, Cole Enoka and a homerun by Ben Enoka (2 RBI), the Czechs were not able to make up with the damage during their at bat in the top fifth inning. When Jerome Raemaki hit a solo homerun in the bottom of the fifth, the score was 5:0. Because of a RBI single by Cole Evans and a walk off double by Jackson Watt, the Black Sox took the win at the last round-robin game on a mercy rule 7:0.

1.9. - Enjoy the most important moments from Friday in our video.
Archive